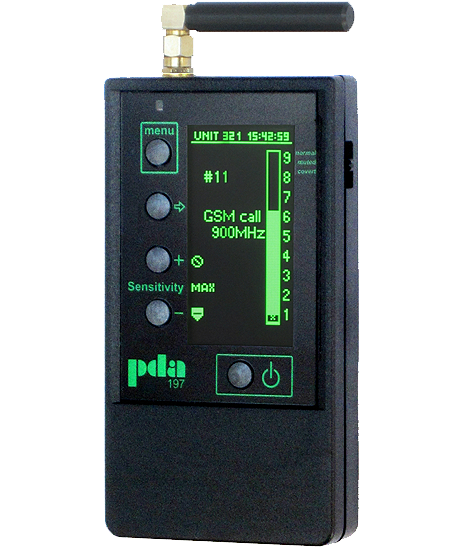 With GSM phones getting ever smaller, they are increasingly being used in areas where they are forbidden. This technology is also becoming the preferred medium for bugs and other surveillance devices. To combat these problems, PDA Electronics has developed the multipurpose PDA197 mobile phone detector. Advanced band-selection filtering coupled to our unique signal-detection algorithms and easy-to-use displays gives unprecedented sensitivity and selectivity for this type of equipment.

The PDA197 can detect 2G (GSM900 & GSM1800), 3G (UMTS900& UMTS 2100) and 4G (LTE800 and LTE2600) mobile phones. For situations where greater accuracy is required, and/or specific monitoring is required in areas containing multiple phones, a specially designed directional antenna system can be used with the PDA197.
The PDA197 keeps a record of all the alarms and complies totals of each type of technology detected. This information can be displayed via its Statistic Display. This allows the user to see whether there are any trends to using new technology. In prisons for instance if most of the alarms are GSM, officers will be looking for the small GSM devices. If the 3G totals are high, then officers would be looking for much larger phones. 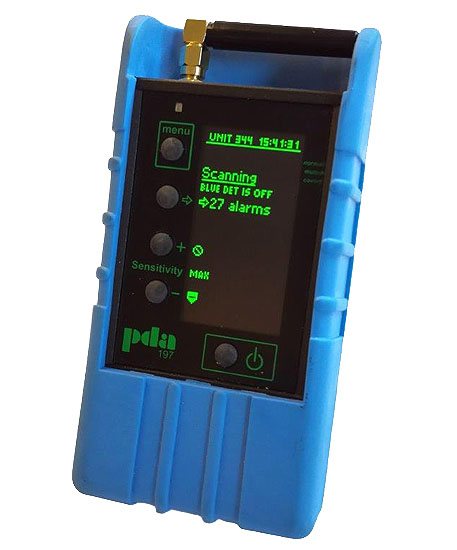 The PDA197 incorporates several new features to protect against false alarm indications. The first is a special software filter to reject DECT signals.

DECT phones work in a frequency band adjacent to the GSM1800 band and cannot be rejected entirely by hardware filters.

The second feature is Public Mobile Radios rejection. The PDA197 will reject a 3G alarm if a special PMR circuit detects energy in the 400-500Mhz band at the same time. This prevents prison radios from causing false alarms due to harmonic transmissions.

The large green OLED display provides the user with details such as Configuration, Alarm information, Display of past Alarms, Statistics etc.

The four soft keys allow the user to move easily between the various functions. Display brightness is automatically controlled to match ambient lighting.